On the 31st of October 2014, the Zisukanyo crèche was opened and handed over to the community. The 10 x 5 structure has a classroom, storeroom and toilet in it.

The beautifully painted exterior was complimented with an assortment of educational toys, puzzles and books both in English and isiXhosa.

The celebrations were started off by learners from a local primary school performing a dance which clearly set the mood for this jovial occasion. The community chief welcomed all parents and community members to the reveal and stated that, “This crèche was the pride of the community and that it would be looked after by all.”

Mike Glover, Director of Touch Africa, thanked all the community members and the chief for allowing us [Touch Africa and the Ride 4 Change participants] an opportunity to build the crèche and venture through their beautiful village.

Once the formal proceedings had taken place – 15 excited kids walked into their new crèche and took their seats at their new desks – in front of them was colouring books and crayons; each child started colouring in immediately. 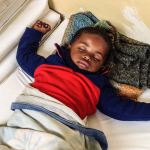 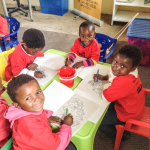 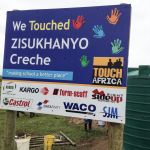 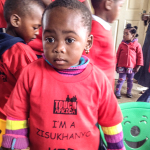 I am a Zisukhanyo kid